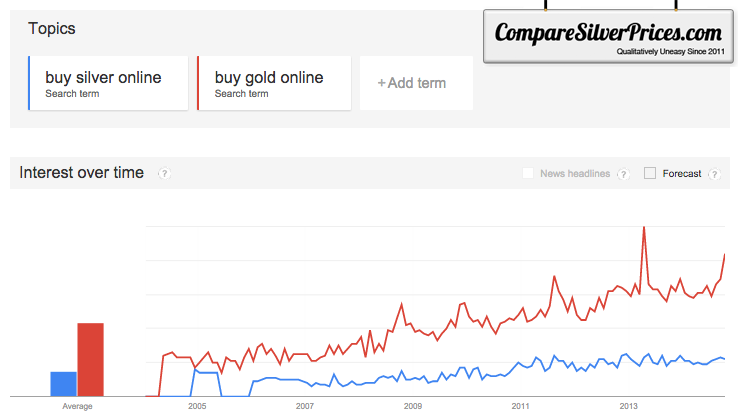 Gold and Silver are seeing increased interest in buying according to Google Trends amid some of the lowest prices in recent memory. Alongside the sagging metals prices, Bitcoin faces at times enormous selling pressure, but it too has seen incredible demand to shore up a recent $7 million on-market sell order.

As you can see by the following Google Trends chart, people are searching the terms “buy silver online” and “buy gold online” with increased interest.

Gold and silver have all corrected dramatically in recent weeks, with silver and gold both touching four-year lows in price. This, alongside a very uncertain and top-heavy stock market, could have led to the increased interest in precious metals online.

Gold and silver has faced crickets from the mainstream press over the past year or so, despite loud allegations of market manipulation by the same banks already caught manipulating LIBOR, as well as a new pricing mechanism in replacement of silver’s silver fix.

A hard bottom might be forming, however, as the metals digest four-year lows. Wall Street was shaken by selling last week. The problems will persist for the market, it seems, as concern grows regarding the European economy – they are considering quantitative easing themselves – and US corporate earnings reports sent the Dow Jones industrial index to its biggest loss in three months. Monday markets were up, but only marginally.

“The Dow took a nosedive out of the gate today, due to escalating concerns about the global economy. Lackluster industrial output data from Germany and a downwardly revised global growth forecast from the International Monetary Fund got the bearish ball rolling,” according to Andrea Kramer, analyst at Schaeffer’s Investment Research.

There are only so many places for people in stocks to go. Many will run into a spiking US dollar, but not everyone will do this. For many, bitcoin, gold and silver will represent traditional and novel safe-haven investments. However, for many more, government bonds and their soaring prices will be chased.

Stay tuned to CompareSilverPrices.com for more information on the best prices in bullion (for USD and bitcoin) as these markets shake out some weak hands.