Home /Bitcoin/The Experts Who Believe One Bitcoin Could Be Worth $1,000,000

“Most of the people who are on the sidelines not buying bitcoins today will start to buy when it gets over $1,000, and then a greater percentage of people will definitely plow into bitcoin once it trades over a $10,000,” once said financial analyst Max Keiser on his RT show The Keiser Report.

The irreverent Mr. Keiser, a longtime proponent of buying silver, is one of the many leading Bitcoin voices who believe that bitcoin won’t only reach it’s all-time highs of approximately $1,200 USD, but will then increase to $10,000, and even $1,000,000 per bitcoin. Some of them are included in a video which feature those who believe Bitcoin could reach $10,000 to $1,000,000.

Those who agree cite reasons including Bitcoin’s deflationary model, fiat currency inflation and hyperinflation, currency war, and increased demand for Bitcoin as it proves itself useful to increasing number of individuals.

Mr. Keiser often interviews Rick Falkvinge, a more calculating financial analyst than Keiser who uses data to demonstrate that, indeed, Bitcoin very well could one day be worth $1,000,000.

Mr. Falkvinge, like other analysts, view Bitcoin’s central value as the cryptocurrency’s transactional purposes, which is made possible by the underlying blockchain technology. The question then becomes: How much of the transactional market can Bitcoin capture?

Estimating the size of the transactional currency market is hard to do, but the amount of money in circulation worldwide is posited at 60 trillion. Mr. Falkvinge believes it’s reasonable for Bitcoin to capture 1% to 10%. Mr. Falkvinge writes:

This leads us to a target market cap of 600 billion to 6 trillion USD, to be fulfilled by about 6 million bitcoin, which makes for easy calculations. That means that each bitcoin would be worth $100,000 at the low market cap and $1,000,000 at the high market cap.

Wences Casares, CEO of bitcoin service provider XAPO, made a prediction similar to Falkvinge’s. “ I think that there is a higher than 50 percent chance that a bitcoin is worth more than a million dollars,” he said on a panel at TechCrunch Disrupt 2015. 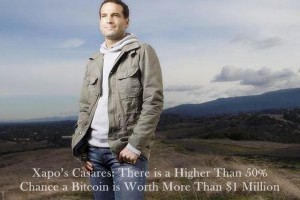 In the Bitcoin.com Forum, Mr. Casares has explicated his thoughts on future Bitcoin price movements.

“It is hard to estimate how many people on bitcoins, but it may be somewhere between 13 and 15 million people right now,” Mr. Casares says. “If Bitcoin is successful we will see hundreds of millions of people own Bitcoin and, eventually, billions. The only way we can get to billions of people owning Bitcoin is by the price going up by several orders of magnitude, let’s say $ 1 million (but this is highly speculative and risky). So, if I am right, and Bitcoin has to go from $390 to $1,000,000 the best way for it to get there without crashing irreversibly is with as much volatility as possible.”

Longtime Bitcoin proponent Trace Mayer, who can be credited with teaching many gold and silver investors about Bitcoin, has made multiple cases for a Bitcoin price of more than $1,000,000. In one graphic, Mr. Mayer’s websites RunToGold.com and HowtoVanish make the case for $1.4 million as a reasonable price for bitcoin. In discussions, Mr. Mayer has made even more astonishing predictions.

“If you moved just 1% of the cash balances from off shore tax haven bank accounts, which currently hold estimated 30 trillion dollars of value, if you move just 1% of that into bitcoin you are looking at 2.8 million dollars per bitcoin,” the precious metals and bitcoin investor said.

Not only have Bitcoin investors made such predictions, but media has carried the narrative to a mainstream audience. In an article entitled, “Bitcoin to $1 million? Why it could happen,” CNBC chronicles Mr. Casares comments to Wall Street Journal that Bitcoin could reach $500,000 to $1,000,000,000.

Similarly, writing for Business Insider, Henry Blodget headlines with “The Price of Bitcoin Could go to $1 Million”.

Mr. Blodget, to be certain, also believes Bitcoin could be worth $0.