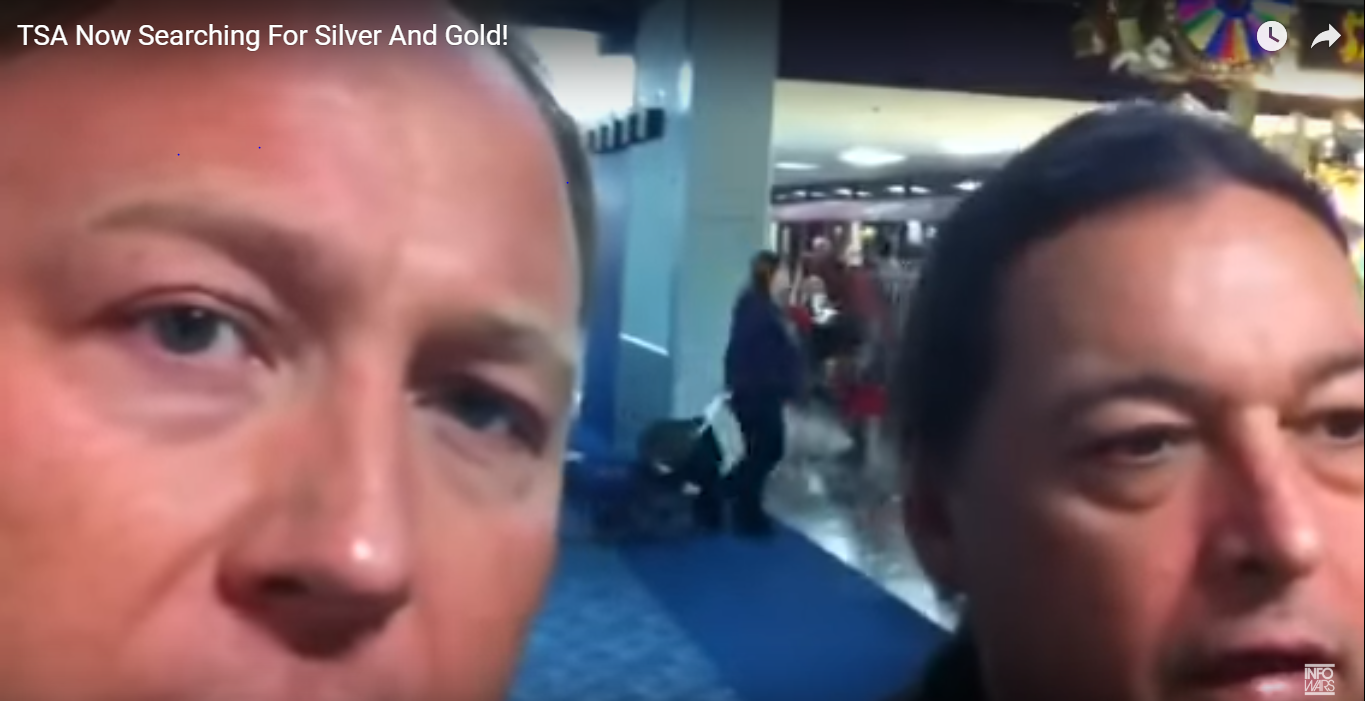 Gold can protect you from a satanic elite, too.

Alex Jones reports on the news from behind enemy lines, at his “Central Texas Command Center and the Heart of the Resistance.” After appearing on Mr. Jones show in the run up to the election, then president-elect Donald Trump called the radio host “a nice guy.” Since then, Mr. Jones has enjoyed increasing influence.

Mr. Jones, whose Facebook describes him as “ruggedly handsome”, appears on YouTube in videos titled things such as, “Alex Jones Epic RANT!!”. In one video, Mr. Jones contends he’s uncovered evidence for a nationwide crackdown on gold and silver.

He begins by showing “the sheeple” – as he calls tends to refer to ‘the masses’ – gambling at the airport casino. Before saying, “Hello, Alex Jones here” in his signature style.

“I am getting on a plane from Austin to Vegas today, it’s Saturday, to fly out for Jesse Ventura’s ‘Conspiracy Theory’ third season,” says Mr. Jones, a stocky, deep-voiced Texan with green eyes and a receding hairline. “I am going through the TSA line and I see they pull a guy to the side. So, later when I saw him, he got on the same plane as me, I asked him…Here is Jeff…he had a couple hundred in silver coins on him.” Jeff explains his story.

Jeff, like Mr. Jones, had been running late for his light. The lady behind him noticed he had coins and asked if he collected. So, the TSA inquired as well, asking him if he was a hobbyist, collector or investor.

“I am going to Vegas,” Jeff tells Mr. Jones and his viewers. “I figured I would cash out these coins instead of taking money out of my bank account, and TSA was telling me maximum is $600 bucks, so she actually wanted me to pull these coins out in [secondary]. I thought they were gonna do a bomb probe. They opened them up. They are just silver coins, collector’s proofs.

Mr. Jones then erupts: “You have US Mint silver, you are not allowed to carry regular money…Well, listen, you’re an evil thought criminal. You’ve got real money and not like Bank of America where every time you use gas they charge you five percent, and now every time I use my bank card the bank calls and ask me if its fraud or not.”

Jeff, who believes he has been put on a government watch list, quips. “TSA’s objective to protect me. I guess if I threw this at somebody I could overtake the plane, so I guess it’s a weapon.”

Mr. Jones isn’t so sure about the blacklist theory. “I really think what’s happening, really what’s going on here, and I’ve confirmed this, is they are grabbing [Ron Paul t-shirt vendors looking for cash]. It’s about tracking the underground economy and treating cash like it’s illegal.”

Alex warns Jeff: “You know you put this in the database and wrote this all down?”

Mr. Jones sums it up: “It’s about tracking money laws, so you can’t get your money out. We have some of the most draconian in the world. This country is becoming a total tyranny.”

Gold confiscation is a real threat, as are cash bans, according to numerous posts on Infowars.com. Last December the website covered an alleged European plot by bureaucrats to confiscate gold and silver and another post suggesting the Department of Homeland Security might confiscate gold in the U.S..

At the heart of it all, a global economic collapse. The economy section on Infowars.com and Prisonplanet.com is called ‘Economic Crisis.’

“A global economic designed meltdown [is] coming and out of it they are gonna announce a new planetary government backed up by strategic drawing rights, SDRs, it’s just digital made up money backed up with carbon taxes, digital money transfer taxes, VATs paid by regional government combines into the IMF, World Bank, International Bank of Settlement controlled by the WTO,” weaves Mr. Jones in a video seemingly filmed in his studio as he stands before a ‘Waking Life’ poster and pro-Second Amendment decor.

He continues: “Secret agreements like the TTP transfer all power to unelected corporate boards that have diplomatic and corporate immunity and for all intents and purpose are about 95% tax exempt.” He suggests they get tied up in some of the taxes they “thrust on their slaves.” He means you and me.

His Infowars shop has funded much of Mr. Jones’ expansions over his radio and Internet career, which has seen him become a mainstream news personality by numbers. Infowars-branded products, like dietary supplements, detoxifiers (including some derived from trees like the South American quassia and the buds of organic cloves), and T-shirts. Survivalists, of whom many in his audience might consider themselves, can sleep peacefully after owning $1,797 “Info Life Select” one-year food supply.

Genesis Communications Network, a small online and syndicator out of Minnesota, specializes in conspiracy theory. Mr. Anderson founded it in 1998 to promote Midas Resources who sells gold and silver coins like Morgan dollars and British sovereigns.

A common remark by Mr. Jones might be: “It’s come out they’ve been artificially depressing [gold] like they’ve been rigging currency markets and interest rates.”

Midas describes itself on its website as “[o]ne of the world’s premiere precious metals firms, parent company of The Genesis Communications Network, proud sponsor of the Campaign For Liberty and creator of the Ron Paul Air Corps.” But, Midas, owner of a one star Yelp account, has mixed reviews online.

Mr. Jones is considered an extremist of the “antigovernment Movement”  by the Southern Poverty Law Center, a legal nonprofit advocacy organization.

“Jones’ radio show and websites are chock full of ads for “recession-proof” investments in gold coins and other precious metals offered by a company called Midas Resources,” reads Mr. Jones’ ‘extremist file’ on the SPLC’s website. “Midas Resources is owned by Ted Anderson, who also owns the Genesis Communications Network, syndicator of ‘The Alex Jones Show.’”

It’s not only bullion which Mr. Jones muses on about, as sometimes 24 karat gold comes across his news radar. When in 2012 police in Thailand arrested a British citizen after six roasted fetal corpses – some of which plated in gold leaf for black magic rituals- were found in his luggage, Mr. Jones reported.

“Every week they catch them shipping little babies wrapped in gold foil for these guys to eat. They admit that’s where it goes to, I’m not making this up,” Jones said at the time.

Despite Mr. Jones’ irrelevancy, even some darlings of liberal Hollywood like the Texan’s variety show. Richard Linklater cast him  in small roles in the 2001 film “Waking Life” and in “A Scanner Darkly” in 2006.